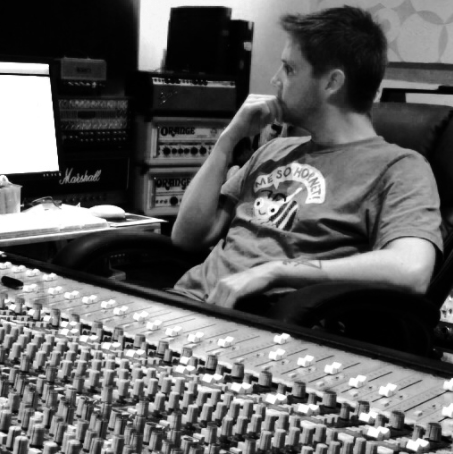 Adam Jordan began his career in audio in 2000, under the instruction of Pete Gage (Nekromantix, The Meteors).

By 2004 Adam was engineering the majority of the sessions at Main Street, working on albums and releases for Australian bands as well as overseas clients.

In 2009 Adam took over ownership of the studio and has been working to further build the studios reputation.

Since being at Main Street Adam has produced and engineered thousands of recordings for international and national artists as well as film and television projects.

As a child, I always had music playing. There is a photo of me as a baby with huge headphones on and breadsticks as drumsticks!

I also remember one day when I asked my mum to turn the radio down, she knew that I must not have been feeling well if I wanted the music down.

So music has always been a big part of my life, but as a child and teenager, I hadn’t thought about the potential of a career in music.

I didn’t do music in school. Looking back now, I wish I had.

It would have been easier to absorb music theory while younger, even if I didn’t understand it at the time, eventually things make sense, but it is harder to learn new things when older.

At the time of finishing high school, I wanted to be a film writer and director.

I was accepted into Film and TV Production at TAFE. This course was over 2 years, as part of the course I specialised in sound for Film and TV.  Near the end of the course, it was

announced that a music production course would be running the next year, so I let the

teachers know I was interested and applied for that when it came up.

While studying, I definitely wasn’t proactive enough at approaching studios and trying to gain work experience.

I wasn’t arrogant enough to believe I knew everything, but I felt like things would just fall into place, and although they did for me, I don’t recommend this approach!

Once the course had finished, I sent the resume out to as many studios as I could find in the local area.

Eventually, in the third round of sending resumes, I was invited to interview at Main Street Studios, then I did some work experience.

After a couple months, I was doing paid work and about 9 years ago I took over the business and have built it up further.

The best part is that every day is always different.

Even though the theory and technical part of the job is the same, the difference is in the songs, the style, the artists I’m working with…so no 2 days are ever the same.

I also enjoy experimenting and trying new ideas, so that keeps things fresh for me as well.

I also love the creativity; I am at the stage with most of my clients where they trust me to be more hands on and experiment with their songs, so it’s fun to see what new ideas we can come up with.

I usually start around 9. If it is day 1 of a session, we get the drums set up, then get the sounds, this usually takes 2-2 ½ hours… Then we start tracking drums…

If drums are done, then that’s when the fun begins with building the sounds and ideas. Each day, being different, is really never typical.

These days I work until 7pm (no more 15 hour days for me), I find it best to make sure everyone is well rested and has time to reset their minds before doing it all again the next day.

Start doing things, ALL THE THINGS! Learn as many instruments as you can, you don’t need to be a master, but have enough knowledge that it is useful.

Start recording your song ideas, friends songs, even if it is just basic. The most important thing to learn, that takes musicians years, is arrangement, so record songs, listen to each part, learn when things work and when they clash…

Get out and meet as many musicians as you can, become friends, these will be your clients when you are working, it is all about relationships.

Don’t be a rude, arrogant, know-it-all… Accept that fact that others will know more than you and those that you think know less, will still know something you don’t, so learn from everyone and never burn bridges.

Music should be about bringing people together so don’t bring negativity into that, don’t bad mouth anyone else or other bands.

Watching bands I’ve worked with get signed to labels or touring the world, or even releasing an EP that their friends love… It is all highlights to me, seeing the smile on someone’s face when they hear the song that was in their head now coming out of the speakers, that always makes me happy.