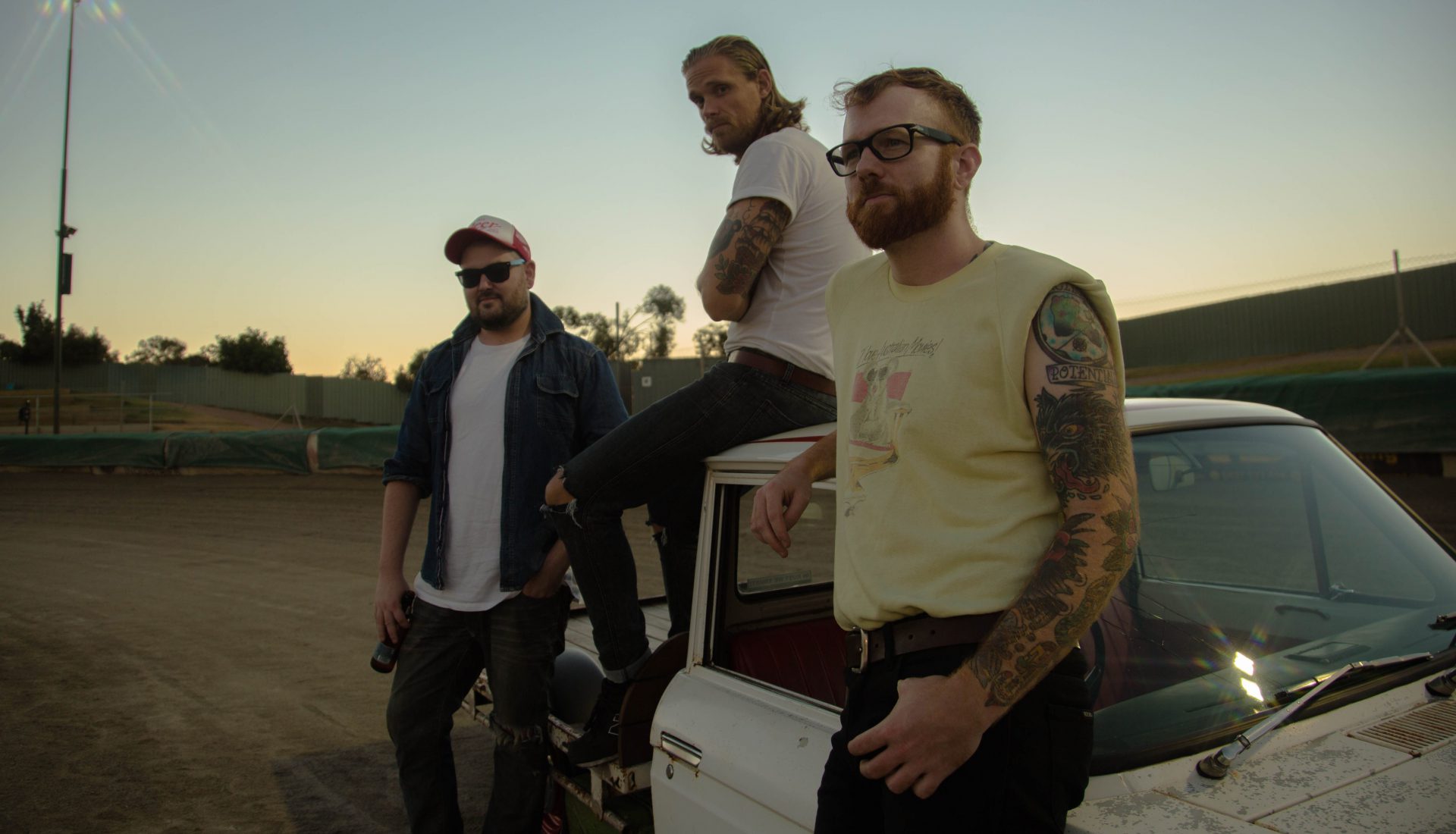 For over seven years, Grenadiers punk/rock straddling fury has seen them rise above the tangle of middle-of-the-road domestic rock. The trio emerged victorious to claim triple j feature album status for their acclaimed 2nd LP ‘Summer’ last year, touring nationally with punk legends Millencolin and Shihad and decamping to the UK to dominate at The Great Escape. Happy Mag listed Jesse in their ’20 Aussie Singers You Need in Your Life’ piece. Rad.

Individually, Jesse, Phil and Jimmy are rooted deep within the history and mythology of rock, punk and hardcore. This common fanatical adoration is the foundation-stone of their relationship.

Combined, they become a fearsome, relentless beast that sounds like its feasted on the souls of Queens of the Stone Age, The Bronx and Bad Religion, at midnight in an abandoned desert truck stop. With these awesome powers they write songs that dissect the absurdity of the everyday.

And that is refreshing as hell.

More than anything else, local bands. I grew up as a teenager going to as many punk/hardcore/metal/rock shows as my parents, finances and age restrictions would allow. Of course I had bigger international and national idols in the music I listened to, but it was the local guys I would see slogging away at it week in and week out that I admired the most. I think because I felt a connection to them, could talk to them a bit and realise they were just normal people like me, not golden gods on a stage made of clouds. That really inspired me to play and start my own bands.

When I finally got a band together when I was about 16, we just started playing wherever anyone would have us- house parties, bars, community events- I remember we played in the school yard at lunch time once which was weird but fun. I never really had many music lessons- a few guitar lessons but that was it really. I didn’t have the patience for it. I think that’s a great thing to apply yourself to, and absolutely necessary if you want to be a gun at your instrument, but I just wanted to get out there and play more than anything. Playing in bands was my musical education (as well as opening my eyes to a lot of thing in life, good and bad).

After school, was music a career you were all set on pursuing, or was it more of a mutual interest initially and you had other careers in mind? Do you each have other jobs besides music?

I never saw music as owing me a career and I think if you go in with that mentality, you’ll end up very bitter. Music isn’t like architecture, or law, or any other vocation where you can study, learn your craft in a formal setting and expect to have some kind of gainful employment at the end of it. There are no rules in the music industry, it’s a ruthless game but full of great people too. With music, you have to throw yourself into it with everything you got but it HAS to be because you love it, not because you think it’ll be easy (clue: it’s not) or because it’ll pay well (clue: it doesn’t).

If you go in with the right attitude, that being one of total commitment to and love for what you do, you will probably come out on top. But who knows really. Everyone in Grenadiers has a day job, though 2 of the 3 of us works in music. I book venues and run events and our drummer Jimmy owns a recording studio. Phil works in a bank (what a stiff!).

You won the triple j Unearthed One Movement Award in 2010 for your state and got to play at the One Movement Festival at Perth. Besides this amazing achievement, what steps did you take after school to develop your career?

To be honest that was fun and an honour, but didn’t really do anything overnight. I think that’s a common misconception about playing in bands or being an “undiscovered” talent in general; that if you slog away for a while, one day your magic moment will come where some bigwig chomping on a cigar signs you to a million dollar deal, and then you get to tour the world and write music for the rest of your life. That’s the case for maybe 1 in ten million artists (probably less).

For everyone else that has some measure of success, it’s a long process of doing what you love, failing, getting knocked back, picking yourself up, losing money, making money back, and achieving these great milestones along the way. The milestones add up until eventually people respect what you do. It’s an incremental process, and it’s only after doing a bunch of stuff such as One Movement, Bigsound, etc as well more grass roots stuff, that you start to see it pay dividends.

You self-record and mix your own songs in Jimmy’s studio. Explain the process of how you do this, and how you can achieve such an amazing end product before your albums and EPs are released?

Well, you write a bunch of songs, make sure you have them tight as the lid on a Dolmio jar, and then you head in. Usually you do drums first, then bass, guitars, then vocals, but having said that there’s no right or wrong way. Recording is a curious mix of art and science. You have to know your equipment and the way things work technically, but it’s also about capturing an indefinable essence or vibe to what you’re doing. People get caught up in gear and technology but honestly, 99% of a great song is a great performance. Production is important, but what people really listen to is the passion or feeling behind the beat.

In a relatively short period of time, you’ve played at major music festivals; toured across Australia, released two albums and several incredible songs, played on Triple J’s ‘Like a Version’, had a feature album on triple j (Summer), won the Best Group award at the South Australian Music Awards, and were nominated for the Australian Music Prize. Apart from natural talent and a strong work ethic, what do you attribute to your success?

Natural talent is cool but there are heaps of great bands out there that don’t have it. So if you’re learning guitar and can only play a few power chords, don’t get discouraged- listen to the Ramones for example. None of them could play to save their lives, but they became one of the most loved bands in history.

What’s important is perseverance, and more than anything, a strong DIY ethic. DON’T wait to get signed or noticed, cos it’ll never happen. People only want to help you if you want to help yourself. Write songs, record them, release them (don’t wait for a label to pick you up), book your own tours. Do your own thing and in time, people will pay attention.

Throughout your career, you have worked alongside respected Australian musicians and industry professionals such as Cold Chisel and British India. Have there been any particular people you feel have inspired you, and assisted you to further develop your skill set and music techniques?

Everyone develops your skills- you see something you like, you rip it off. Don’t be afraid of that either- own it. You’re never going to sound like your ripping people off as long as you rip off enough DIFFERENT people. So I think everyone you meet along the way shows you something you could be doing differently.

Frenzal Rhomb were a great inspiration to me growing up, as were The Saints, Radio Birdman, Midnight Oil, Mindsnare, etc. The Drones are a massive inspiration to me, as is Nick Cave. I’m good mates with a lot of people who inspire me with their great attitudes and work ethic, such as the guys in Luca Brasi, Clowns, The Smith Street Band and others. It’s the best thing in the world, seeing your mates kick arse on a national and international scale. Bands I’m digging in Australia at the moment- West Thebarton Brothel Party, Ecca Vandal, Forevr, A.B Original.

Getting Triple J’s feature album was a great feeling. Playing Like A Version was also a heap of fun and something I was proud of. I think the best achievement is every time we play one of our own shows and 150 people pay money just to come see us. That’s the best feeling, better than any support or festival or anything. We’ve just finished our third album so I’m looking forward to getting that out and seeing what the future has in store for us!

Connecting with people you don’t know from a bar of soap is a very gratifying thing. It’s hard to describe how it feels when someone you’ve never seen in your life in wearing your band’s shirt and knows all the words to your songs. As for my “career” per se (I still don’t make any money from actually playing music)- I love working in music because I’ve learned so much over the years about what works and what doesn’t- that means I can put that knowledge in place so people don’t have to go through some of the same torture I did in my formative years. I just love the feeling of pulling off an event, selling out a show, getting a great booking for a venue I work for, working at a festival and seeing that all the bands are happy and everything’s going smoothly, etc etc.

My job is basically solving problems and cleaning up mess, so when you don’t have much to do, it’s a good sign that you’re doing a good job. But yes, it’s important to note that music IS a tough industry. If you want a cushy job or something that pays well, stay well away. If you want something that is immensely satisfying and versatile and requires every ounce of your creative ability and mental toughness, maybe music is a good option!

There’s only one reason you should consider a future in the music industry- loving music. If you’re doing it for any other reason, quit while you’re ahead. It’s a crapload of work, often for very little reward. When the rewards come they make it all seem worthwhile, but NEVER underestimate how much blood, sweat and tears you have to pour into any kind of music-related career to make it work. Do it cos you love it. Anything else is a lost cause.