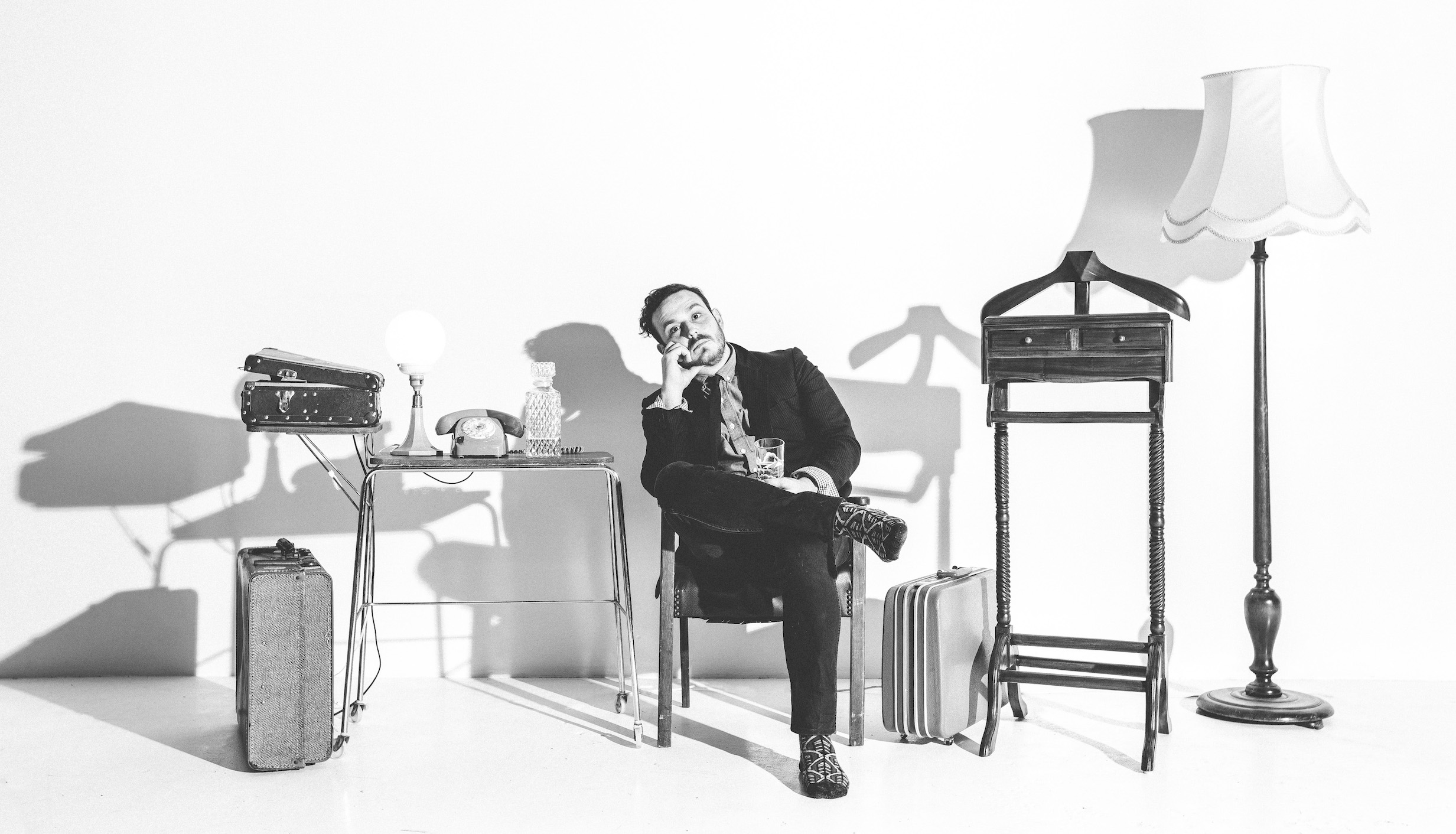 Mathas has somewhat cartoonishly rapped on stages around Australia for well over a decade.

The subjects he chooses for his stories are often un-comfortable reflections on Australian society, however the nature of his comedic, character-filled performance style tends to draw the crowd into the narrative and coerce them to feel involved.

A pretty positive, communal energy amasses in the room when he’s on stage.

Tracks like ‘Nourishment’ (featuring fellow West Australian Abbe May) saw him use native food as the framework for a poetic discussion about the complexities of indigenous Australia.

Elsewhere he’s tackled death and our connection to the planet in ‘Stone Cold Sober’, while ‘Enforce Less’ explored the paternalistic nature by which Australian state laws are put into effect and the realities of living in a society governed by them.

Along with handling the majority of the album’s production, Mathas also recorded & mixed it himself as well as painting the album’s artwork.

‘Armwrestling Atlas’ was nominated for the Australian Music Prize long list in 2015. It also received 4 star reviews across multiple media publications including Rolling Stone & The Brag.

Following his first national headlining tour in support of Armwrestling Atlas, Mathas began 2016 with the release of his latest single ‘Bravo Troll’. The single explores the folklore of the nordic storybook troll and its connection to the modern internet version.

In mid 2016 Mathas embarked on his largest national tour to date, performing with a full band and including performances at Wide Open Spaces Festival, NT and Big Pineapple Music Festival, QLD.

It was followed up by the “Bravo Troll Reworks EP” that featured remixes by Trials (A.B Original) & Joelistics (TZU), among others.

Mathas was also the first ever urban or electronic artist to win the WA Music Industry’s coveted Song of the Year Grand Prize with the song ‘Nourishment’ as well as consecutive WAMI Awards for Urban Act of the Year in 2012, 2013, 2014 and again in 2016.

I wrote poetry from about as early as I could write. I used to bind my own books with my dad and fill them with words.

I was really into grunge in year 4 primary school and started learning guitar. Over the years I played a little piano & drums.

I started writing raps and playing with drum machines on my four-track recorder at 14 or 15 years old.

Ultimately I think the drive was always that I found great pleasure in rhythm and writing lyrics.

What music activities did you participate in whilst you were at school to build your career and who inspired you through your schooling years to explore your passion for music?

The first music lessons I ever did were violin & piano in primary school, but I was probably a bit too young to stay dedicated to either.

I started learning to play guitar and played in a band at a great little music school called Andrew Teo’s School of Music at about 8 years old.

He was a super supportive fella and employed great teachers. For a few years in high school I did drum lessons with a phenomenal drummer named Hans Dreiburg who drank about 7 coffees a day and played like he had 7 arms.

There were a few teachers in high school actually who were extremely nurturing to my creative side. I had an amazing photography teacher called Cliff Woodroofe who was an avid music lover and would let us play our own music in class.

I also had a jolly Irish drama/media studies teacher named Frank Murphy that spoke almost entirely in proverb, who respected me and treated me like an adult.

My family have always been crucially supportive of my music making. Another great inspiration is my friend Diger Rokwell. He kinda by accident taught me that my voice and my art were valid.

Upon leaving high school, I did my first gig as a rapper three years later in 2003 with my old group Math&Balance. From there I met a bunch of life-affirming characters who also made music.

After a few hang-outs we decided to start up a collective which we named The Community. Its aim was to act as an umbrella for a bunch of us to work under and create, sort of a branding, more of a family.

What has been the best piece of advice you’ve received to encourage you to pursue your career goals?

To be honest I don’t think I looked at music as a “career” as such for most of my life until the last few years.. It was always just something I did.

I do remember a specific incident a long time ago where a friend of mine had done his first ever mural, his girlfriend wasn’t impressed by it and took it apart critically.

Diger Rokwell got really angry in his defence and said, “What matters is that he did something, it’s easy to be critical and sit there not doing anything yourself, he did something, he took a risk, he put it out into the world and that’s something to be proud of.”

It made me realise that every piece of art you put into the world is a stepping stone, you can’t please everyone (even yourself a lot of the time) but it’s best to put something out and move on to the next thing because there’s growth in that risk.

The biggest highlight has been in garnering actual fans. My music is pretty thick with words, it’s very much of an opinion, so when you meet people at shows who really understand where you’re coming from and vibe on it, they probably have no idea how life-affirming they’re being.

When you spend your whole life working on your craft and people that you don’t know personally, understand it and follow it, that’s really one of the greatest feelings of human connectivity I’ve experienced.

Hmmm… this is an interesting question for me to answer as I’m personally not able to support myself with music at the moment. I still work in hospitality as well, but to be honest I’m quite happy with that balance.

I think unless you’re a big name artist or a professional musician who plays a specific instrument and gigs many times a week, it can be quite difficult to sustain yourself.

My best advice would be start as early as possible putting music out so that you can move on to the next release/project and build & develop as an artist.

Get good at what you do first before expecting the industry to be on board with it, they’ll come to you when the music’s right.

I’d also look at other avenues besides release to get your name out there or find revenue streams, people really don’t buy albums like they used to, so video content, streaming and social media presence are pretty important (unfortunately).

When you get really good at your sound, another good area to look into is publishing and trying to get your music used for television, movies (and advertising if that’s your thing).

In summary I’d say, don’t expect to make money out of it for a long while but keep developing and learning how to, and at some point you very likely will. Care about the music first.

There is a saying that if you find a job you love, you’ll never work a day in your life’. What do you find to be personally fulfilling about your career in music?

I reckon I’m not far off this.

I do love hospitality but I’ve been doing it for 13 or so years and it does grow tiring, so ultimately my aim is to have myself at a point within the next two years where I can be completely supported by my music and activities related to it, i.e workshops, mixed media projects, publishing syncs, performance & selling merchandise.

The most fulfilling things about making music for me are the moments where you’re in your home studio, late at night, the city’s gone to sleep and the tune you’re working on suddenly clicks into place.

There’s been several times over my life where I’ve found myself dancing alone with headphones on at 3am. The other one is stage performance and the connectivity you experience with your audience.

Sometimes there’s a united energy amassed in the room that is probably my favourite feeling on the planet.

I put an album out last year called Armwrestling Atlas that took me far too long to finish. I produced almost the whole thing myself, recorded it, mixed it, painted the cover art and subsequently spent far too much time in a dark room at a computer.

So with my next project I’ve decided to use other producers, collaborate on the song writing and use an actual studio with actual instruments in it!

Also as I said above, I hope to be able to live off my music within two years.