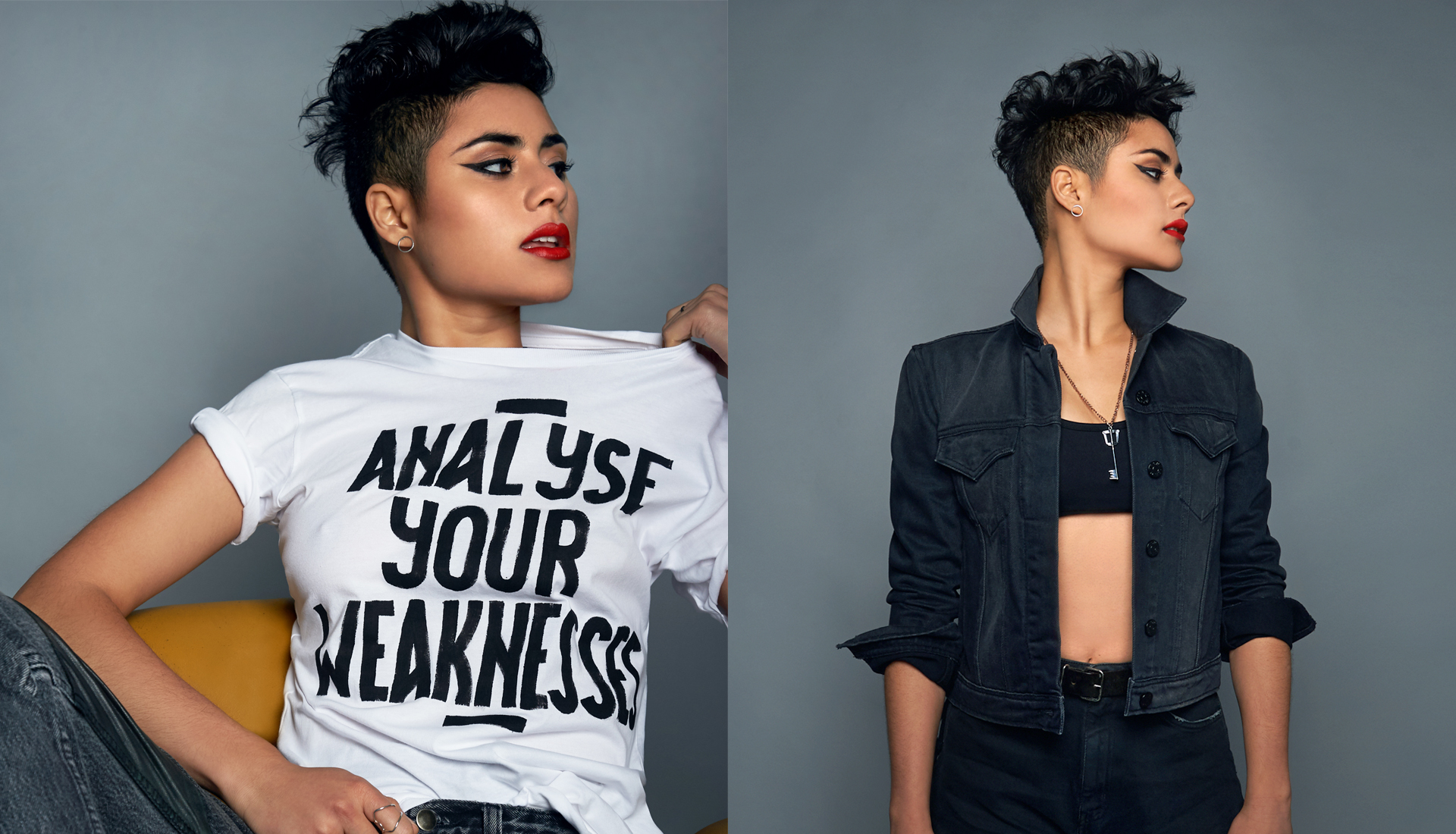 “I’m more than ready,” 21 year old Sydney singer/songwriter Montaigne (aka Jessica Cerro) says. “It feels like it’s taken a long time to get to this point.”

It’s actually been a short but colourful ride. In 2012 Montaigne with her song Anyone But Me was a triple j Unearthed finalist.

Slight problem – she was still 16 years old and in high school. She signed a publishing deal (with Alberts, no less) and juggled her higher education with a musical one.

The teenager celebrated getting her HSC by finishing her first EP Life of Montaigne.

There’s been a string of impressive songs leading up to Glorious Heights – I Am Not an End, I’m a Fantastic Wreck and, more recently, Clip My Wings (one of the #1 most played songs on triple j) and In the Dark.

“That song put me on the radar of people that wouldn’t ordinarily be into my music,” she says. Her stunning cover of Sia’s Chandelier for triple j’s Like A Version was so powerful that Sia herself tweeted in admiration of the vocal chops on display.

Glorious Heights continues the beautiful musical partnership with producer Tony Buchen (The Preatures/Andy Bull), who also co-writes a number of songs on the album.

“I have a billion songs I’ve written by myself but Tony and I have this energy between us that works really well.” On Glorious Heights Montaigne and Buchen have created a sound that is unique yet still laden with ear inviting hooks.

There are unapologetic tips of the hat to some of the great pop acts of decades past, but these are cleverly interwoven into what feels like a very fresh sonic landscape.

Much has already been made of Montaigne’s powerful voice – regularly compared to Regina Spektor, Marina and the Diamonds, Bjork, Florence & the Machine and St Vincent.

That’s good company, and, Montaigne points out, accurate comparisons. “They are some of my influences, especially vocally. I’ve been compared to The National once, I was very happy with that. And Owen Pallett, I was so happy with that, he’s in my Top 5 favourite artists.

There are a lot of artists that influence me: Arcade Fire, Everything Everything, Coldplay, SigurRos, Depeche Mode, Talking Heads…it’s a long list.”

Glorious Heights is also about to introduce Montaigne as one of this country’s most interesting young lyricists. Her vocabulary is exemplary, her subject matter diverse.

The album cover, featuring Montaigne and two dragons, was created by American illustrator Wes Talbott, also touches on Montaigne’s love of medieval video games as well as being a metaphor wrapped in some really cool artwork.

“The two dragons represent problems or adversity,” She says. “I’m slaying one dragon, or one problem, and over my shoulder unbeknownst to me is another dragon, or another problem, just about to eat me.

I’ve just defeated one, but I can barely bask in my victory because I have another problem on the horizon.

It can be demoralising and draining but the reason the sword is glowing and I’m dressed like Lara Croft is because you are the hero of your own life and you have to keep going with that unrealistic optimism, but use your endurance. It’s character building. It makes you who you are.”

After choice opening slots for San Cisco, Japanese Wallpaper, Boy & Bear and Megan Washington, and playing sold out arenas with Hilltop Hoods this year, not to mention her own sold out national tour, Montaigne is ready to showcase Glorious Heights live.

She’s also appeared at many of the nations favourite festivals including Groovin’ The Moo, Come Together, Secret Garden and Splendour in the Grass, with appearances booked in for later in the year at Lost Paradise and Beyond The Valley.

Her own ‘Because I Love You’ October national tour ran to sold out dates in 2016.

“I enjoy connecting with the audience, I love looking everyone in the eyes,” she says. “I want to feel as close to them as possible. I thrive on being on stage.”

Montaigne received her fair share of nominations this year including the National Live Music Awards, the Cosmopolitan ‘Fearless Woman of the Year’, triple j ‘J Award’ and of course the ARIAS where she won Breakthrough Artist and was further nominated for Best Female Artist and Apple Song of the Year/Best Video for her feature on the Hilltop Hoods ‘1955’.

It depends how early you mean! Pre-12 years old it was a lot of pop music on the radio in the early 2000s – Delta Goodrem, Britney Spears, Christina Aguilera, whatever was on rotation on Nova – as well as a short stint with emo/scene/pop punk music and Japanese pop and video game scores thanks to my obsession with a video game called Kingdom Hearts.

Additionally, I would passively listen to whatever my dad was blasting from a huge playlist he curated indiscriminately on Sundays (chore days) which included a heap of 70s/80s pop hits (Queen, Bowie, Earth, Wind & Fire, Depeche Mode etc) as well as lots of 90s hip hop, soul and R&B.

And then my early teens was defined by a love for Disney and the Jonas Brothers, Australian Idol and all those… so again pop music on commercial radio as well as some cheesy Disney pop.

And then from the age of 15 I found alternative music and dabbled in everything from Feist to Bon Iver to Sigur Ros to Arcade Fire. This is also when Spotify was having its advent so I got to really explore music.

I was also into Glee from age 15-16. So I’ve always had pop in my brain but have very alternative sensibilities.

I wasn’t really trying to build my career until I hit triple j Unearthed High, and then after that played a few gigs, stopped during my HSC, did some co-writes during Year 12 which were organised by my publishing label with whom I signed around the time of Unearthed High, and that’s pretty much it I guess!

Figured out what moniker I wanted to take on and all of that. It was mostly conceptual work, brewing things in my brain.

After school, was music a career you were set on pursuing, or did you have other careers in mind? What steps did you take after school to develop your career?

I was a bit hesitant because I’d internalised the notion that I was not going to be a musician, but I wasn’t entirely sure what I did want to be.

I was doing an arts degree at university for a semester before I realised that I fully wanted to commit myself to music.

While doing both uni and Montaigne, I did put out music and was active on socials and was with Alberts and all of that. Also found management with Wonderlick Entertainment, which then led to a bunch of label contracts.

My mum & Alberts handled all of that. Alberts reached out to my now management along with a bunch of others and Wonderlick were immediately keen and I liked their attitude, ethos and manner and roster so I signed with them.

We then spoke about signing a licensing deal with their deal and after much consideration my mum and I (mostly my mum haha) decided it was a good idea.

Before Wonderlick, my mum was reaching out to people via email and phone. She’s quite the go-getter.

In a relatively short time, you have toured, featured on the triple j Hottest 100, played on triple j Like a Version, won music awards, released an album and several incredible singles, and have nearly 28 000 supporters on your Facebook page. Apart from natural talent and a strong work ethic, what do you attribute to your success?

My mum, haha. And luck. And good timing. And living a healthy lifestyle that enables me to get things done.

My parents raised me with the right attitude as well. My background in elite sport probably helped a lot.

Tony Buchen and my band, probably. And Sarah Belkner, who is my current vocal coach. By being around them and touring/working with them, I’ve absorbed a lot of know-how.

Well it’s exactly that. I love music. So. It’s not hard for me to stay motivated. I’m resilient and enjoy trying to conquer challenges so obstacles don’t phase me too much.

Some young people who are passionate about music don’t pursue a career after school, as they are concerned they won’t have a secure job or career. What advice can you offer young people (and their parents/guardians) who are thinking about pursing a career in the music industry?

Pursue a career. Do it. But also get an education. Have a backup. It is indeed very very hard. And so you’re going to have to work hard even to just get a CHANCE to “make it”.

I got very lucky. I wasn’t even going to try if I didn’t get that Unearthed High spot. And I know so many bands and have so many friends who are trying their darndest to make it happen but it is hard.

So be prepared for it to be hard. Work hard. Practice. Hone your craft.

Be kind, people like working with kind, diligent, personable people.

Be persistent. Send stuff to labels that you think is good, and if you don’t get a reply, make more stuff and make it better than the last stuff and send it again.

Be interested not just in yourself but in the needs and desires of people you want to work with. Make others feel important, socially.

But the most important thing is to be good at what you do, especially at writing a song. Write good songs. That should be your focus.

If being an artist doesn’t work out, consider other positions in the industry. Get involved in volunteering for community radio, write for blogs and publications, do internships at studios or label offices, go to gigs, just be involved in the scene.

You will meet people and things will catalyse.